Requirements: Level 1 of all stats.
Start: Drag the statue from the cupboard on the desk.
Description: This minigame is an analogue of the game "plumbing" with one difference - you need to connect all the available parts, not just draw a line from beginning to end.
Finish: For successful completion you need to assemble all 4 sectors of the puzzle and inspect it.
Guide: 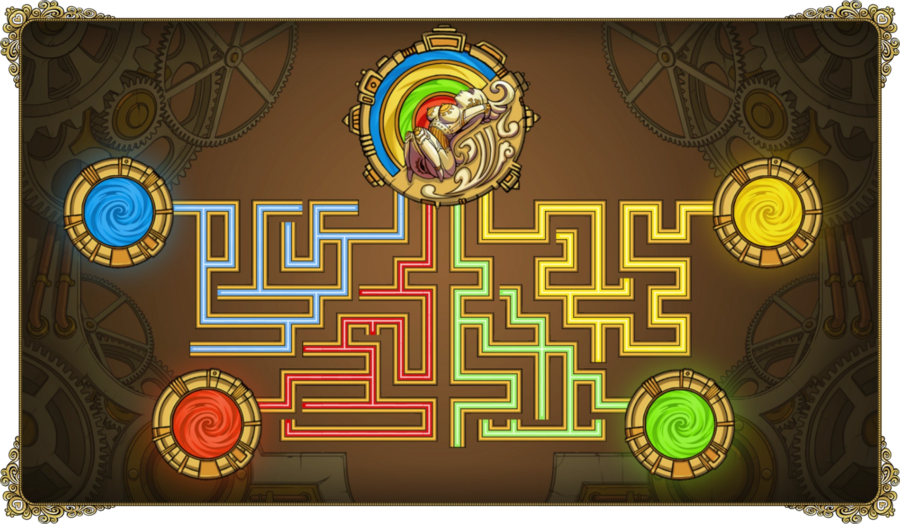 A Game of Wits

Description: The minigame is a "fifteens" game in which the player needs to put together an image from several fragments in the allotted time. The number of fragments into which the original image is divided depends on the selected difficulty level. In case of successful completion of the task, Hermione will take off part of her clothes.

"Easy" - image is divided into 8 fragments.

"Normal" - image is divided into 24 fragments.

"Hard" - image is divided into 48 fragments.

Each stage includes 3 substages. To access a higher one, you must go through all the substages in the previous stage. The time it takes to fold the image increases on each next stage.

After choosing the stage player can also choose the difficulty according to the level of "intellect" stat:

"Focus!" - "intellect" level 5 is required. This option reduces the amount of fragments to 8 on "normal" stage, and to 24 on "hard" stage.

"Focus even more!" - "intellect" level 6 is required. This option unlocks "cheat" button for instant victory. Reduces the amount of fragments to 16 on "normal" stage, and to 33 on "hard" stage.

Finish: For successful completion you need to finish all stages and substages.

A Game of Chance

Description: The essence of this minigame is to guess the color of Daphne's underwear by her facial expression. There are 10 common sets of underwear, and 1 special. Each set has a unique facial expression, except purple and rose, they have the same facial expression.
For a single special set (Burnished) Daphne either expresses 2 random emotions or doesn't express anything. If you got a special set, Daphne will refuse to show it and leave. To see it, you need to guess it correctly 3 times and Daphne will finally show it. You have a time to examine Daphne's face, then you can choose - look more or give an answer. A choice of 5 colors is provided for the answer. If the answer is correct, Daphne will undress and show you her underwear. If the answer is incorrect, you will have a second chance to examine Daphne's face and give a different answer. If even after the second attempt you give the wrong answer, Daphne leaves contented and dressed.

Finish: For successful completion you need to see all 11 underwear sets.

Requirements: Time from 10pm to 2am.

Start: Summon Snape unofficially and ask him for pills, then drag it on bedroom door.

Finish: For successful completion you need to give 3 correct answers on workdays and 6 answers on weekend.

Description: You need to answer Susan's questions about the main ingredient of her dessert, based on a description of the flavor and appearance of the dessert itself. For successful completing the minigame, Susan will gradually reveal her chest.

First Stage: The ingredient can be guessed from Markus' verbal description of the taste.

Ask Amelia to send sweets for Susan until she declines further assistance due to Susan's workload. Without Amelia's participation you need to summon Susan officially, play until she says that she will no longer bake due to additional activities with Flitwick.

Second Stage: The ingredient can be guessed by the appearance of the cake.

To convince Susan, order any food from Boni Bonka (for example covered apple or chip cookies) and send it to her unofficially. She comes and says that she is flattered by your attention, and asked Flitwick for a break to make you another cake. We continue to call Susan and guess the tastes until her apron accidentally unfastens and her chest is exposed. After that, she will become embarrassed and stop cooking for you.

Third Stage: The ingredient still can be guessed by the appearance of the cake.

To change her mind, you need to raise persception to 5, come to the main corridor on a workday at 14:00, meet her there and discuss the problem. after that, there will be no more difficulties with Susan, and it will be possible to bring the minigame to the end.

Finish: For successful completion you need to play the minigame until you get bonus scene.

Guide for the first stage:

Guide for the second stage:

Description: This minigame is needed to get the elder wand that Dumbledore hid using a puzzle. When you enter the bedroom, you see a lot of drawers. One of them will be scratched with a sequence of x and zeros. Zero means "open", x means "close". To solve the puzzle, you need to open and close the drawers in this sequence, starting with the box on which you found the scratch. The numbering of the drawers can be found in the picture below. If you made a mistake or got lost, you need to leave the bedroom to reset your actions, and come back in. If to take the picture below as an example, then the order of actions will be: 7 - close, 1 - close, 2 - open, 3 - open, 4 - close.

Finish: For successful completion you need to get the elder wand. 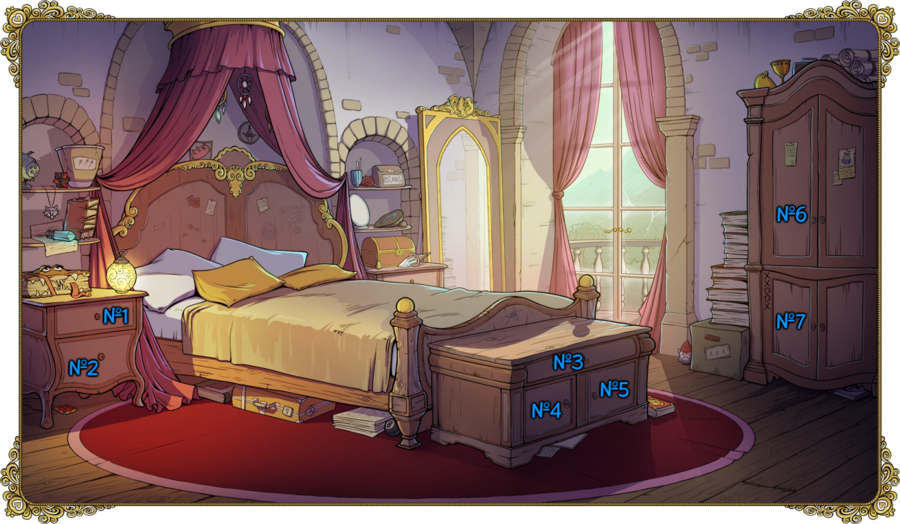 This one... Or maybe that one?

Description:This minigame is a "shell" game, during which the player needs to keep track of three fast-moving cups, and give an answer in which of them is the cake. For correct answers Susan will remove parts of clothing.

Finish: For successful completion you need to win 9 times.

Description: This minigame provides answers to exam questions related to the school curriculum. Successful finishing the minigame will unlock a bedroom scene with Luna.

Finish: For successful completion you need to give correct answers.

Start: Summon Hermione officially and choose "how are you doing?".

Description: The essence of the game is to guess the answers to Hermione's questions based on magic spells. minigame starts with choosing the level of difficulty, then the wheel of fortune begins to spin. The result of the rotation determines what action Hermione will perform if your answer is correct. If you lose, you will be forced to give 200 Galleons to Hermione. The game lasts until a "special action" occurs, which can only be triggered if Hermione is completely naked. You can also purchase a Spellbook from Filch for 1000 Galleons, which contains answers to questions, but you cannot look at it while playing.
Minigame includes 3 levels of difficulty:

Finish: For successful completion the task, you must play the game at least once, the result is not important. Then buy a spellbook from Filch for 1000 Galleons and read it. And then summon Hermione, play again and win.